I can't believe that this is my first post for this year... well that's the way it is. Yesterday I was giving an excuse for not yet dropping a post. "I can't believe I've not blogged this year... all these shackles of school works sha..." Then Sado cut in "hnnmmm you think I don't know why?... Your 100 hours awoof don finish". Lol. No be lie sha and na pesin waifai I connect take post this one (like I'm poorer than a church rat).
Thanks to Samuel (my secondary school twin broda wey don be madass programmer) I'm currently creating my first software for money this year (the guy just corner one job come my side).

Ok, now the issue of the post. Who have been to Oshodi lately? That place have changed like magic. You can like to remix Dare's song - "You not the Oshodi I used to know, You are a shadow of yourself. I think I lost you in 2008, like a ...(ati be be lo). That's like the biggest miracle of 2009. Nna meeennnn!!!
Just like the object oriented programming paradigm, Oshodi now have organised features. Let's take a look at some of them

FEATURE 1: FROM THE BRIDGE, YOU CAN ACTUALLY SEE THE CONCRETE ON THE ROAD. Remember the last time you boarded a bus from Jibowu to Oshodi (say Dec 23 2008, after CSC307 class) the bus stops midway at the bridge and the conductor screams "gbo gbo ero!!!". You bole and as you walk down the bridge, you catch a glimpse of people and danfo and molue competing for space. Then you search for the black tar on the road. If you are too short sighted to look further to Bolade junction, you'll think that Oshodi was actually tarred with people, danfos and molues that move randomly like molecules in a chemical reaction. Go and look down the bridge now and you'll think another intelligent scientist dropped a better postulate that Oshodi decided to go with... Ok don't take a bus from Jibowu this time cos they'll stop you at the Other end of the bridge (LASTMA is looking for scapegoats on the bridge and no driver want to fall victim).

FEATURE 2: YOU CAN ACTUALLY SEE THE FOOT OF THE BRIDGE FROM BOLADE JUNCTION - UNBELIEVABLE!!! It's like all the magic of Oshodi took place between bolade junction and Oshodi bridge. Abi now. Seriously, walking along Agege motor road Oshodi now is like walking along La Defense road in Paris cos you can actually see the bridge as clearly as you would see the Arc Du Triumphe. Reminds me of our Imagine cup trip to Paris. That fateful day when we crashed out of the challenge, when Seun crept to the room to sleep (maybe cos he could'nt handle our ouster), when Jide, N'Dee and I strolled around Paris and returned to the hotel at 1 am (Jide was actually dozing off - with mouth wide open - at the shop when N'Dee was making her selection of cloths!!!). Ok on that fateful day I saw the future of Oshodi (even though I didn't recognize it). The Arc du Triumphe was clear from down the road at La Defence just as the Oshodi bridge is clear from far away. See it now. 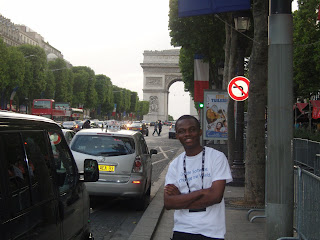 Now that is the future of Oshodi.

The features are plenty O... You can't cross the road again without looking left and right (and left again) unless you don't want to see Super Eagles win the world cup next year... You have to queue to use the pedestrian bridge (be careful sha cos the bridge is shaking O)... They are now planting flowers around... etc. You can name your own observations. Oshodi is now some tourist centre of some sort. Go and see for your self.

SEMI POST:
Suzanne Wenger, the oyibo Osun worshiper died this month at 97 years. As you have read in the papers, she was an artist that came to visit Nigeria when she got fascinated by the culture of the Osun people and deceided to become an Osun worshiper. She later rose to the post of high priestess.
I first read of her when I was in JSS1 in one fine art text book and I loved her story ever since. Little wonder I recognized her face (amid all the wrinkles) at the newspaper immediately I saw it.

Preparations for Imagine cup 2009 is underway. I'm leading the team of programmers. Dr Fash has dropped another really crazy idea and is leading the technical committee (I call it the executive council) and Jide is the team co-ordinator. We are doing the system analysis and coding is going to start very soon. The team motto is "Win in Cairo" and that's where our eyes are. It's going to be fun and I hope to maintain another blog dedicated to our 2009 Imagine Cup challenge(with Dr Fash's approval). Wish me luck.