"I'll cut your head off, see if that works"

That was Wolverine's reply to Sabertooth's question. The last conversation in the trailer to the latest X-Men movie scheduled for release on May 1. The movie rekindles the rivalry between Wolverine and Sabertooth and brings legendary X-Men characters like Gambit, into the scene. Cos of this movie, I downloaded two Wolverine wallpapers with Hugh Jackman in perfect pose.
Watch the trailer:

Wait for the next one. I enjoyed the novel so I'm certainly going to look out for the movie. Robert Langdon and Vittoria Vetra are going to save the Vatican from the cold revenge of the Illuminati on the night of the conclave. It's Dan Brown's novel, Angels and Demons on the big screen. Tom Hanks would be a character to watch out for. A sequel to the Da Vinci Code (even though I ddnt watch that), I'll certainly look out for it. Scheduled for release on May 15.
I got two trailers for the movie:

Click the link below for the biggest movies for this year. The box office shakers from Yahoo! movies.
http://movies.yahoo.com/photos/collections/gallery/1319/top-10-box-office-movies-of-2008/fp#photo0

I'm feeling dis Fela guy, GOSH!!! We need a new Fela badly to keep our gofament people on their toes.

If u'll volunteer raise ur hands up.

It's Christmas eve and I'm blogging, facebooking and listening to Gorillaz. Was coding until I inserted my express card now I'm online and...

Wud av had lectures yesterday but Dr Fash accepted our appeal to call off the class. He also gave us next week off. But not Prof Sofoluwe. Oga DVC didn't want to call off his Monday class o! He says "It's not compulsory to attend lectures now." The boss use one assignment hold us. "You should submit on Monday" oga said "But it's not compulsory o! You can even submit after the exams shebi it is me that will deceide if I'll mark it or not"

We missed the family's Christmas tradition of goat meat peppersoup last Christmas, well I think we did sha. I've spent the last couple of days at aunty Nkiru's place at Anthony village cos popcy can't be spending 500 box everyday for transport to UNILAG(not to talk of the one I spend from my pocket). Mumcy came here yesterday for some business stuffs and I forgot to remind her that this year we mustn't miss the peppersoup.

It's a full house already. Francis and Anthony are back from school. Chima has always been at home (though he can't wait to resume at UNIBEN next year). I'm the only one missing. Once it's dawn, I'm outta this place.

I've developed a habit of neatness lately. I bath at least twice a day,...bla bla bla. Today was different sha. It's like harmattan started today so I was reluctant to bathing this morning. When PHCN struck in the afternoon and I finally decided take my bath cos the laptop battery had ran out, they brought the light back so I chilled. To cut the long story short, I didn't bath today, lol. Lazy me.

Merry Christmas to any one who reads this post before Christmas is over. If u read it after, save the greeting for next year Ok!

"When you tame a beast, you control power..." goes one advert by Stallion Automobiles on Cool FM. But the title line is from Coldplay's award winning album track - Clocks. I was singing along with this track when the line struck me.

First about the song. Clocks was written by Chris Martin and was the last track to be recorded in the album "A rush of blood to the head". It gained wide acceptance and won the Record of the year at the 2004 Grammy Awards.

Now the line "A tiger's waiting to be tamed" flooded my head with the great talents that exist around me. In this context, the "tamed" now represent the ability of these folks to harness their skills and explode with them.

First Anthony. My immediate younger brother. The most creative person I've ever met. Currently studying for a degree in Architecture at UNN, he's a bundle of skills when it comes to drawing, sketching, shading, painting,... etc. Was going through his sketches for last session "my favorite hundred sketches", I couldn't help but marvel at his abilities. All Chima could say was "I wonder where Anthony normally get all these idea from". I used to draw better than him but when I decided to drop the skill and focus on my studies (succumbing to pressures from parents), he continued. Now he's a phenomenon. See for yourself: 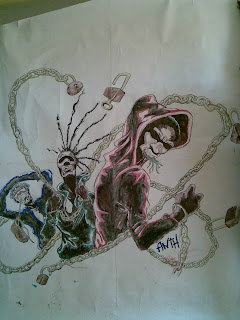 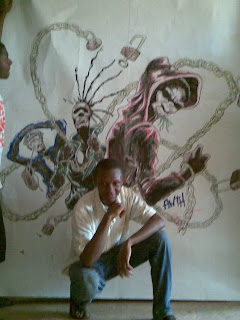 Wait did I say he and Chima were joint runners-up at the Commonwealth Youth Program art competition for 2006 (or 2007). They have the kpali for it at home.

When Kennedy told me he wasn't going to return to Lagos last holiday I was not very surprised. I had taken that decision too but the unavailability of accommodation chased me home. Ok, now I received this call from one "09" number. I knew immediately that it was from Abuja (I had a friend there who used to call me). "Hello Celestine..." the person on the other end said. "Hello who's this", "It's Kennedy... I'm in Abuja to interview Soludo." Levels!!! Kennedy is the Communications Officer of the Students' Union at UNN Enugu Campus and had gone to interview the Central Bank Governor for their SU mag. Kennedy and I hold similar ideas on most issues of life little wonder he called me on the night of Barack Obama's victory and we chatted for over 30 mins on the phone (not free night call o!). Great communicator and very politically inclined. When I told him I wouldn't do politics he was quick to point out that politics is everywhere. "If you plan to start-up and grow a multinational software company, you must do politics" and I don't agree less.
I remember vividly the circumstance that brought us together. I was going to "chyke" a girl that was his friend. He refused to permit me cos the girl was a girlfriend of another friend of his. Well the discussion swayed from the girl to us. We discovered that we grow up at the same neighbourhood and faced similar challenges and we bonded from then. His versatile nature is going to hold the world spell-bound when he explodes.

Now Rayo. I saved her name as Debola on my phone. Well I don't know why I think this chic is a phenomenon. But each time I decide to visit the blogsphere, her blog (all4words.blogspot.com) is my entry point. I think her writing skills are extraordinary. Jide (my Imagine Cup teammate) doesn't disagree. We read her post "My father's house" and Jide was really impressed. I'm a jambite in writings but Jide has read every novel you can name. I started with Dan Brown's Angels and Demons and I really enjoy the book. I'm not an expert but I think she'll explode if she exploit the skill. She's studying Law in Unilag and she wan be lecturer (nna mmeeennn, hot!).

I know a lot of other people who'll explode if they succeed in taming the tiger in them but for now watch out for these three. Better get to know then before it's too late.

Meeennn I cracked a number of relationships last week cos I was terribly broke. Was supposed to go for the burial ceremony of Lolade's dad but I couldn't make it to Aguda Surulere on Wednesday and Thursday. I was away from home and my maga was supposed to pay me for a software I debugged for him but he was posting me so I couldn't do much. Ebele called me on Tuesday and I was to see her on Friday, but I couldn't make it, even though she called me on Thursday to remind me. I was supposed to go to Tinu's place on Saturday and teach her how to use NetBeans IDE 6.5 but I fkd up. I'll spend a lot of money this week to mend these relationships... hmmm.
I dnt know the kind of pain I'm feeling at the right hand side of my lower jaw o! It can't be a dental problem cos I brush my teeth everyday (yes now). I think I'm teething. But the last time I counted my teeth (over a year ago) I think they were 32. The pain's actually getting to my upper jaw, close to my ear. It better go on time cos I don't have time for it.lol.

-->AMEBO<--
I visited GRAMMY.com for the nominees for the 51st Grammy Awards. Lil Wayne topped with 8 nominations. My Coldplay was next with 7 nominations from their album released June this year "Viva la vida". Go check out the nominees and make your predictions.

It's such an unfair world! Why can't we just want something and get it just as we wanted? Why does life have to permit that we be denied the pleasure of enjoying what we would most certainly give all for? Well, those were obviously the questions of the Baudelaire orphans when the were going through the miseries of count Olaf.

I remember when I first encountered the movie "Lemoney Snicket - A Series of Unfortunate Events". It was at Sodehinde hall common room. As usual now, guys were screaming "Porter!" when the happy little elf scene started the movie. A little while later, power was interrupted and everyone was chanting curses to "NEPA". Power was restored and seized at intervals so we never had the pleasure of seeing the end of the movie. Today was different as I had dinner and returned to the movie without "NEPA" noticing it.

The story - Three siblings lost their parent and had to be adopted by a relative. He tries to kill them to get their parent's fortunes. The law discovers and takes them from him but he follows them under all guise and eliminates anything in his way.

The lesson waited for the end of the movie before it manifested itself: "Every unfortunate event is an entry into a pleasant journey ahead..."

With a number of past experiences I've come to discover that this is true. One don't always get what one desires but one have the power to choose. Choose to stare helplessly at the spilled milk or chose to grab the opportunity that opened up after a door closes.

Our choice determines if we actually lost a fight or we discover another path with every seeming defeat.

To me, defeats don't exist. But as Robert Langdon's (in Dan Brown's book, Angels and Demons) father told him "If it wasn’t painfully difficult, you did it wrong."
Good things they say, don't come easy.