Java as we know it may soon be considered a legacy language.

On Tuesday 13th of September 2011, between 5:00PM and 7:30PM, Nigerian time, at the local Microsoft office in Lagos Nigeria, I watched a live streaming of the official unveiling of Windows 8. Stephen Sinofsky lead a team of presenters who showed the world what the future of Windows (and invariably, PC) would be. Part of what was demo'ed is the new platform for windows development. Developers would now write their apps in erstwhile web-only development languages: JavaScript, HTML and CSS as native Windows App. There was an overhaul of the Windows development platform the Windows sack now has: Windows Runtime (WinRT) --> JavaScript --> HTML & CSS OR WinRT --> C#/VB/C/C++ --> XAML. The same app would run unmodified on desktop, game consoles and mobile devices. I'm still WOW'ed. 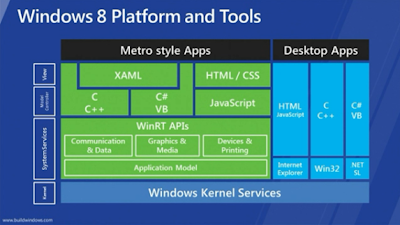 Now my arguement is this: The main promise of Java which is Write-Once-Run-Anywhere is (almost) finally broken by a sexier language. Before I continue, let me point out that I am a passionate Java programmer. I've been writing Java since 2005 and it's currently my favorite language (I'll choose it over any language -- Human or Computer). People who know me know that I'm very passionate about the language. And when I see posts which asks when Java would disappear, I just laugh at them. But with windows adopting JS as a native language, all I need to do now is write JS and it would be executable on all platform. Considering that Node.JS has already made it possible to write JS  apps for UNIX-based systems, even though it's not native, it still (kinda) works. I strongly believe that many OS vendors would love to replicate the ubiquity that JS brought to browsers; noting that JS is also backed by a set of standards.

Anyway, I'm still gon code Java passionately while it's still relevant, though I doubt Oracle would fold their arms and watch Java die.

BTW, if you want to try the new release of Windows before it is finally released, then visit dev.windows.com and download it. I'm not a fan of pre-release versions so I'll just wait till it's finally released.

Image is courtesy of http://cybergyaan.blogspot.com.

TiketMobile, the second placed idea is a beautiful one. I got to know about the idea when Constance came to UNILAG to tell me of a wonderful idea has. It was at Jaja hall and we sat at the quadrangle, Constance told me that he had figured out a way of getting people to easily buy tickets from their mobile device. He gave a few scenarios and I grabed the idea. We refined it a little bit and looked forward to an opportunity to work on it.

Down the road, he started working with me to get FriendsGreet out and then he told me that he would love to try this idea out at Start-up weekend. I thought it would be a wonderful opportunity to network with other techies and learn a thing or two. Also, the idea of working on a project with a random team sounded like fun. So I did some stunts on twitter and got registered :)

I must confess that if my team hadn't taken second overall on that evening, I would still had been really fulfilled. For me Start-up Weekend was more for the experience than the prize. It gave me the opportunity to see mobile app development through the lenses of Ope (a wizard, I must confess) and also to see the "benefits" of Lift Web Framework (I'm sure Seyi would laugh here) via the insightful analysis of Seyi (BTW, I'm still vexing with L'Erin for taking Seyi away from my team). Also to work with Joe, a gifted graphics designer (who happens to know every high-brow, silicon valley tech blogger and thinks I should blog more too) and Desiree, a really beautiful lady who happens to be a coder too. She's also a wonderful team player as she easily plugs in to the personality of every member of the team.

Start-up Weekend Lagos also granted me an opportunity to do some stuffs for the first time. I got to work on GIT for the first time while pushing TiketMobile web services to AppHarbor. BTW, AppHarbor is a really cool cloud platform for hosting .NET, very easy and straight to the point. Thanks to OO for the AppHarbor tip and Tomiwa for helping me figure-out how AppHarbor works when my head was deep in codes. I also got to meet Maxwel, who said he has been following my blog since wining the first Imagine Cup challenge. I really, really do appreciate :)

All in all, it was a great experience and very fulfilling. What more can I say, my team came second behind a team composed of (obviously) more experienced people. Thanks to everyone for sharing three days of their life with me :)

P.S Err... Francis, thank for registering me in such a short notice, I promise not to put you on the spot again :D
Update: TiketMobile is on twitter at @tiketmobile and TiketMobile on Facebook. We are still gon be developing actively but we are currently at http://tiketmobile.co.cc
Posted by celestocalculus at 6:53 AM 6 comments:

In case you are wondering, SNS stands for Social Networking Sites.

My BSc thesis discussed my study and creation of an application which lets users broadcast to all the contacts on their social networks the way it is done on bulk SMS. I call it FriendsGreet.

The original idea occurred to me around the last week of December in 2010. I wanted to yell a personalised “Happy New Year” to all the contacts on my Facebook so I sought an application which would allow me do it and I foundeth it not. So I decided to create it. I did the barebones and abandoned it for other things. When my final year project came calling, I submitted two proposals one for building a NoSQL datastore (which I called LabRat) and the other was FriendsGreet. When I attended Prof Uwadia’s (my project supervisor) inaugural lecture (which focused on SNS and its effects in Nigeria) around April or May, I was inspired to resume work on FriendsGreet again. I was glad when he approved FriendsGreet.

Below is the link to download my proposals for LabRat and FriendsGreet and also, my final year project write-up (which you should actually be interested in :) ). I’m currently working actively to get FriendsGreet out so you can start using it.

This is why I have been offline for ages, now I’m back. BTW, follow me on twitter on @celestocalculus. I've resumed work on CSC Lounge too.

Disclaimer
The work on this thesis is original. Any resemblance to any other work before this is purely coincidental.
Posted by celestocalculus at 1:55 AM 9 comments: